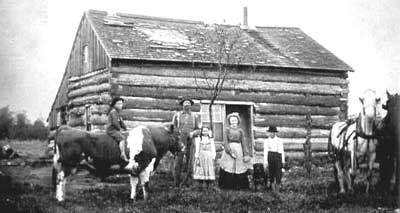 This photo is of William Henry Buchanan and his kids at their home in Wood County Wisconsin, about 1900. The kid on the right with the white shirt and black hat is LL. That was shortly before he went west.

A team of horses and a bull you could ride in those days was the current equivalent of a new Dodge Ram pickup and a Mustang convertible. A little pricey, but the fuel cost was lower. Quiet neighborhood too. 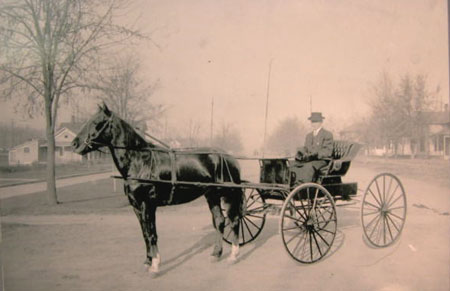 In 1923 LL Buchanan built a warehouse and office at 111 West D Street in Yakima Washington. His business at that time, in addition to operating a truck line around the valley and between Yakima and Seattle, was storing hops and potatoes, and selling coal and wood. Part of the project was the installation of a new truck scales, both for his own use and to weigh the many loads of fruit going to the canneries and warehouses in the neighborhood, mostly along "Fruit Row" (1st Avenue).

That was the beginning of what became the only Certified Commercial Truck Scales in the city of Yakima. When he bought the scales, he got the largest model available, a 27 foot long scales with a wooden deck. He asked the salesman if he could get a longer scales, and was told, "Mr. Buchanan, there is no need for a bigger scales. They will never make trucks too big for this scales."

In 1945 the scale pit was moved a short distance to 115 West D Street when he built a new warehouse and office there. The new scales were 60 feet long, with a dial weight indicator, instead of the individual weights that the operator moved on multiple bars.

In 1970 the scales were removed and a 70 foot scale was installed with an electronic readout and a printer to record the weights for the customers.

Starting on 22 June 1992, the scale deck, a 10 foot by 70 foot reinforced concrete slab, was removed, all the under-deck steel was inspected, worn parts replaced, and a new deck poured. On 15 July at 8:AM, the new scale deck resumed weighing trucks.

Since its start, loads have been weighed across the Buchanan Scales for shipment to destinations all over the Unites States and the world. There was even one memorable day when a man opened the door and asked, "Do you weigh elephants?" The answer was, with a chuckle, "Of course." The man looked back out the door and told his colleague, "Bring it on." He asked for a certified weight ticket for an elephant that was being exhibited at several supermarkets in Yakima, for "Guess the weight of the elephant" contests.

Fresh fruit, lumber, household goods, cattle, hay, military supplies, steel, paper, recycled material, chemicals, oil, milk, juice, canned goods, gravel.... all the products of the Yakima Valley and those used by the businesses of the valley have crossed the scales at Buchanan Warehouse.

The story is yet ongoing. 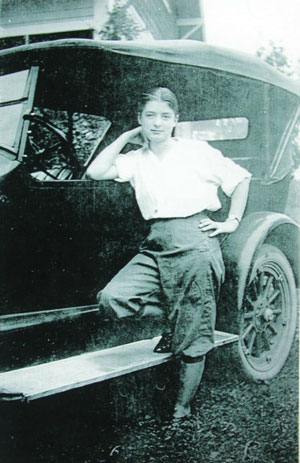 And a bit higher fashion, Laura Buchanan, back in those days. Yakima.

The family home at 115 West D Street, Yakima. It became the warehouse site. 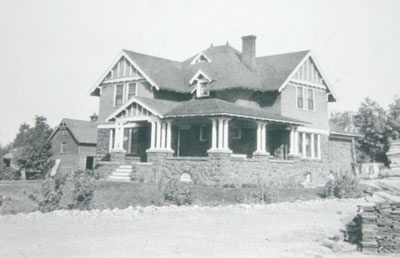 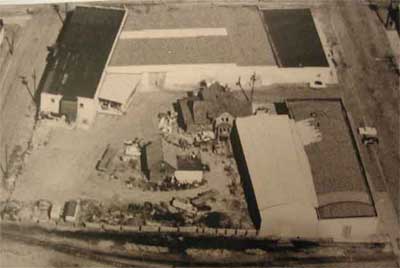 The warehouses with the family house still there, the old shop, and coal dust from the adjacent railroad coal deliveries.

Jim Carter, his team and wagon, by the warehouse, back in those days. 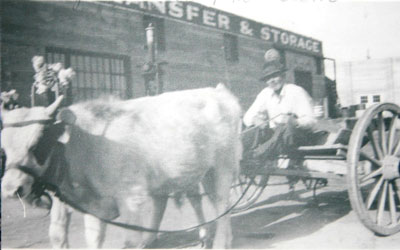 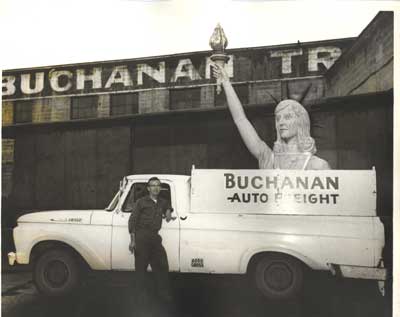 Miss Liberty from the Liberty Building in Yakima. 1964

Miss Liberty was taken down from the top of the Liberty Building, during an upgrade, and auctioned for a public service fund raiser. The statue was a bit heavy for a pickup, but a pickup was the best choice. Back then, railroad cars transporting fruit were still being cooled by blocks of ice. The overhead ramp that loaded the ice into the ice hatches on each railroad car was not very high above the street where Miss Liberty had to travel. The torch brushed the bottom of the wooden ramp as it very slowly moved under. The statue sold for $50, back when $50 was real money. That is Lynn Buchanan wearing the hard hat, and Dick Harper being more casual. 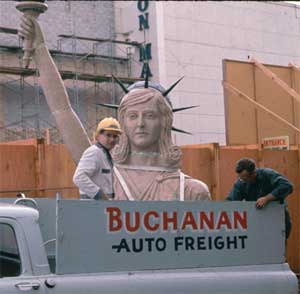